Ah, the Met Gala. Everyone’s favorite fashion event. On the first Monday of every May, we anxiously await the red carpet fashion of celebrities who understood the Met Gala assignment, or simply didn’t.

Vogue announced this year’s theme as In America: An Anthology of Fashion with an emphasis on “Gilded Glamour.” Guests were expected to showcase their take on 1870-1900 American fashion, which famously consisted of white-tie attire – think poufy sleeves, opera gloves, floor-length, voluminous skirts, and opulent jewels. How well did they do? Let’s take a look…. Janelle Monáe
Janelle Monáe was undoubtedly one of the best-dressed guests at the event – and for good reason! She donned a custom-made Ralph Lauren column dress that dazzled under the flashing cameras. The column dress style is no stranger to the Met Gala. In 1995, Naomi Campbell wore a crystal-encrusted Versace column gown that could potentially blind anyone who looked at it directly. Additionally, the silver-and-black jewels covered the singer-songwriter’s hood, creating a truly glamorous effect that adhered to the theme with a unique, futuristic twist. Alicia Keys
Talk about an Empire State of mind. Alicia Keys presented a stunning look that left many slack-jawed. She wore a Ralph Lauren column dress and crystal-encrusted cape, which featured New York’s skyline. The Empire State Building, the Chrysler Building, and other remarkable skyscrapers were clearly visible with her every turn, paying homage to the city’s awe-inspiring architecture. Alicia is not the first to don a cape at the Met Gala. In 2019, many celebrities, both men and women, landed on the red carpet wearing capes adorned with feathers, beads, and jewels. Laura Harrier
Laura Harrier remains the epitome of elegance, class, and sophistication, taking the red carpet by storm in a black glistening Glemaud gown. The corset bodice and voluminous skirt matched the theme, while beaded chokers provided a subtle modern flair to the style. She completed the look with velvet evening gloves, which also made frequent appearances at the 2021 Met Gala on several guests, including Eva Chen, Gigi Hadid, and Yara Shahidi. 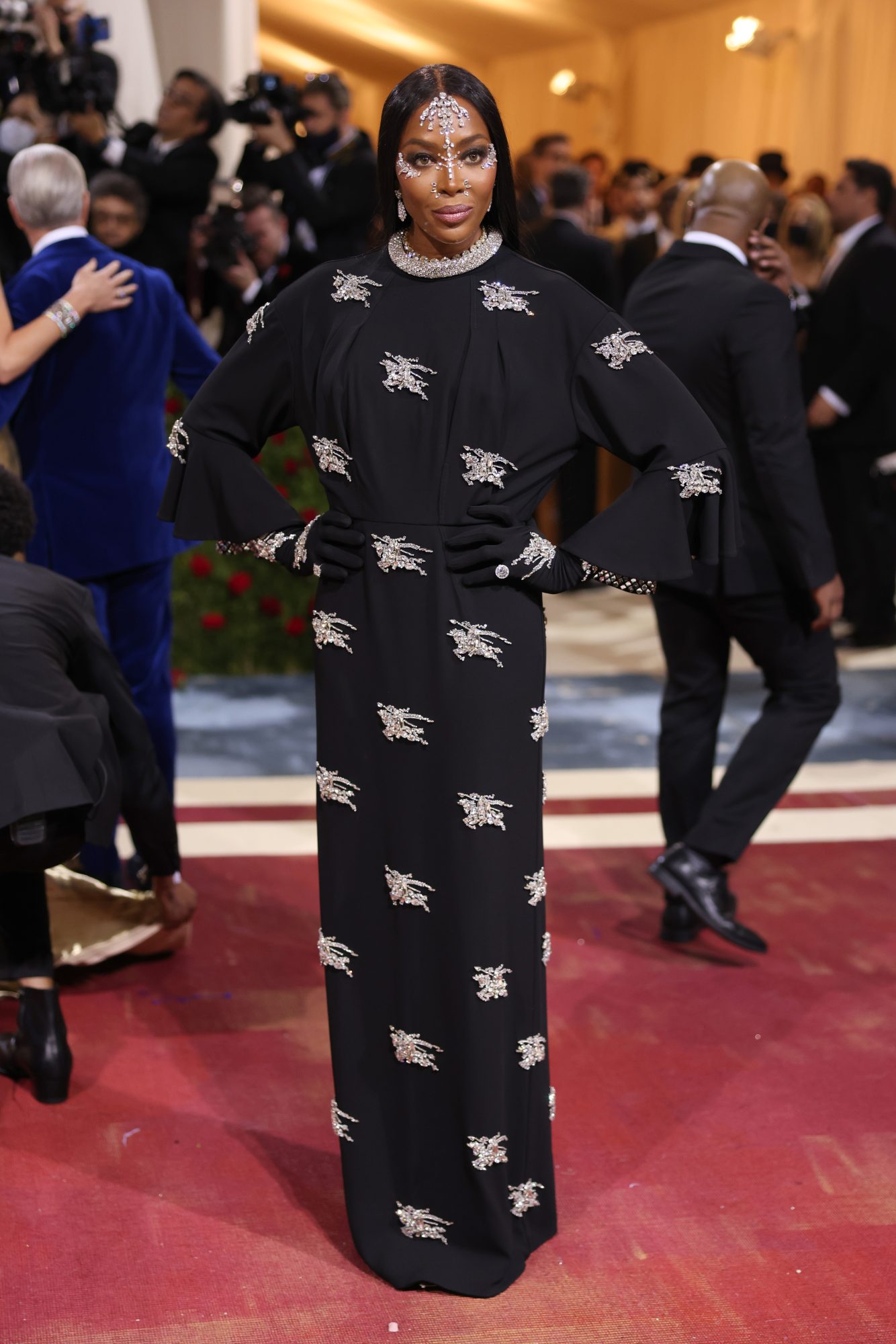 Naomi Campbell
Dazzling from head to toe, Naomi Campbell arrived in a floor-length bejeweled Burberry gown. She paired the black-and-silver dress with a handful of eye-catching accessories, including a $6.6 million Jacob & Co. yellow diamond necklace, which reportedly took two years to create, taking the ‘gilded glamour’ theme to new heights. Blake Lively
It’s no secret that the Met Gala is Blake Lively’s playground, and this year was no exception. As this year’s co-host, she likely felt the pressure to showcase a swoon-worthy look. She certainly delivered, stealing the spotlight the second she stepped on the red carpet in her two-in-one Atelier Versace ballgown, opera gloves, and a bustled shawl that revealed a dazzling aqua train. Like Alicia, Blake’s gown also honored New York’s architecture. She topped off the look with a very on-themed tiara as a nod to the Statue of Liberty. Kim Kardashian
Leave it to Kim Kardashian to arrive in show-stopping fashion. Channeling American history, she climbed the steps in Marilyn Monroe’s dress – yes, the exact sparkly nude dress Marilyn wore when she serenaded President John F. Kennedy on his birthday in 1962. However, to preserve the dress’s condition, she swapped the original for a replica after clearing the red carpet. She finished the look with a pair of dangling diamond earrings and a white fur coat.

Rihanna
Last but not least! The Met Gala is all about celebrating moments in time through fashion. This year, Rihanna won the Met Gala by erecting a CGI statue of herself. The marble statue was inspired by Rihanna’s May issue of Vogue, which features the fashion icon in an Alaïa bodysuit, her baby bump on proud display. So, despite her absence at this year’s event, she still managed to make an unforgettable appearance.

Reflecting on the biggest night in fashion highlights a wide range of styles and, inevitably, opinions. Regardless of our preferences, the Met Gala always delivers on variety, which means every spectator is likely to find a look that suits their fancy. Whether you appreciate ensembles that landed the theme or those who opted for an experimental flair, we can all agree on one thing – we’ll definitely be tuning in for more glitz and glamour next year.