“As long as you’re educated on what you’re wearing, I don’t see why there should be any beef as to why you’re wearing it….I really want people to understand that it’s not just a clothing line; I really want it to be a movement….” -Hazel Dennis

When you mix fashion and philanthropy, what do you get?– A formula that was created by mistake, but gaining it’s way to a household brand. Recently, we were able to chat with Hazel Dennis, creator of Fists Up Afros Out to discuss how one could possibly go from a social work background to eye-catching photo shoots and bomb ass bomber jackets. Not only is she saving lives in her community, but she’s saving your closets along the way….

Modern Stitches: So, what’s your love affair story with fashion? How did it all begin?

Fists Up Afros Out: My dad was such a big fashion influence on me. Of course, if you look at my fashion, a lot of the influences comes from the 90s. Growing up in the 90s, my dad just always had his own style to the point where my mom used to say he would buy new shoes weekly. So, she would throw his old shoes away. It was very eccentric for this time period. Being especially that he was born and raised in Africa, he would incorporate a lot of his African fashions into American fashions. So, when I got older, I noticed that I was emulating a lot of outfits that he used to wear. Things like that.

MS: Do your parents appreciate you paying homage to their style? What do they think?

FUAO: *laughs* Well my dad, and God rest his soul, when he was here he loved it. He loved the fact that I thought he was worthy enough to be a role model as far as fashion goes. And my mom, she’s like the complete opposite of me. She’s very soft spoken, she’s very low key — she would never wear anything like quote on quote flashy. She used to always be like “Whose child are you?”–she hates it. But, I think she secretly loves it though.

MS: Yeah, of course she does! Do you feel like Fists Up Afros Out is kind of like homage to you dad since he’s no longer here?

FUAO: Um…not quite. I feel like it’s more so career driven. I don’t know if you know what haze.haze is; my other [Instagram] page is the brand that I have with my little brother. It’s called haze.haze, so that’s more so the brand that we did for my dad. My name is Hazel, and my dads name was Hayes. So, after he died, my younger brother took his first and last name and flipped it, and made it Dennis [Hayes], so he goes by Dennis Hayes now. We made the page called haze.haze where we showcase our African combined with American fashion. So that was more like homage to him.

MS: Yes, I have actually seen that one and it’s really, really dope. But I definitely didn’t know it was homage to your dad, which is pretty awesome.

FUAO: Yeah, we want to do better branding with that.

MS: *chuckling* It’s all good. So, what is Fists Up Afros Out? What’s the message behind the brand?

FUAO: Fists Up Afros Out was really supposed to be an entire clothing line. I had a vision one day. I was working a 9-5 job for the government, a really good social work job, and I just wasn’t feeling fulfilled as a social worker. I wasn’t feeling like I was really accomplishing my goals, and I started to brainstorm. So, Fists Up Afros Out along with a couple other things came to mind, and I got like five t-shirts done, to start off the theme. And long story short, the guy who I got to make the t-shirts messed it up really bad, like to the point where I had to take him to court and the only t-shirts that survived were the Fists Up Afros Out t-shirts. So I kind of went with those in the meantime, while I was in court and everything, and they just stuck. As I began, I started praying more, and praying more, God was like “you need to take this route, you need to go this route”. Now, a whole year later, it’s just the basis of the entire brand. So, it started out as something that was supposed to be more than just Fists Up Afros Out, but now it’s just Fists Up Afros out, but I think everything happens for a reason. 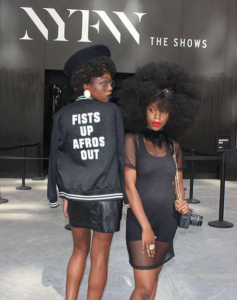 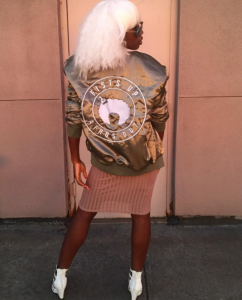 Photo Credit: Courtesy of the Fists Up Afros Out Instagram Page

MS: Absolutely! So, zoning in on the Afros out portion, do you think the idea of natural hair is a fad? What are your thoughts?

FUAO: I kind of feel partial with that too. I do feel like there is a certain aspect of cultural appropriation, but I notice everyone’s definition of cultural appropriation is so much different than mine. People are so quick to scream it out, but my whole thing is I just want people to be educated on it. Like, as long as you’re educated on what you’re wearing, I don’t see why there should be any beef as to why you’re wearing it. For example, I’m from Ghana, and we originated the kente cloth. Other cultures in Africa also wear the kente cloth. But I wouldn’t say its cultural appropriation, as long as they know where it originated from, what color means what, what pattern means what, I think its pretty much fair for them to wear what they want to wear. And, bringing that back to the original question I feel that when people in America wear dashikis and things like that, they’re wearing it because they want to be proud of their heritage but more so, people need to go about it the right way. If you want to be proud about it, learn about it. Learn as much as you can about it.

MS: Absolutely, absolutely. That is definitely a great way to put it. You want people to be educated about it. In that aspect, that’s definitely is what makes it different. Is the brand meant for other cultures? Is it strictly black empowerment?

FUAO: When I originally made the brand, I intended for it to be more than just a clothing line, so I really wanted to merge it with my social work career. And, with my social work career, my passion has always been to help or assist underprivileged populations. So whether that means like black and Latino, or Asian, or you know [disabled] populations or whatever the case may be. The afro really symbolizes a metaphor for freedom and liberation. The peace sign in the logo is for peace and love, and the fist is to symbolize unity; unity speaking as far as all the under privlidged populations. So you can be any race, anything, but as long as you have some type of struggle, I’ll be there to support you, and I feel like that’s the message that I want to get across. You know, I’m all for Black Power, and power in our community, but, after that, it’s of course I want everybody to be a collective unit reaching our common goal.

MS: Absolutely, that’s awesome. So, you wear a lot of vintage, which is kind of how I met you back in 2013. How do you feel like its influenced your personal style? What’s the one thing you wish the world knew about thrift shopping?

FUAO: Thrift shopping has influenced my life because it gives me a chance to travel without traveling. 2015 is the first time I ever been in an airport, ever saw an airplane, ever been on an airplane. So, all these years, my way of traveling besides the internet of course, was to dress through my clothing. The thrift store gave me a good opportunity to do that, because people are donating from all over the world; they’re donating clothes they got when they were 15, in Italy. Things like that. I always read the tags. I always see where they come from. Sometimes I even look up the name, just to see where these labels and just things come from. I just like to know who am I wearing? Where did this originate from? What is this print? I just always want to know.

MS: Yeah, that’s awesome! So vintage is a way of you traveling the world? MS: *chuckling* I’ve never heard anyone respond to that question that way, so that’s really good! So, the bomber jackets are really dope. Where can everyone purchase the apparel?

FUAO: If you go to my Instagram, which is blachaz3, or you simply type Fists Up Afros Out on Twitter, on Instagram, even on Google, there should be an Etsy website that comes up. Just click the link, and they should be right there! They should be the first listing on the page.

MS: Lastly, I just wanted to ask, what’s to come for the brand? Any new apparel for ’17? Are you hosting/attending any new events? What’s going on with the brand coming up?

FUAO: So coming up I am trying to merge it with my career goals. I really want people to understand that it’s not just a clothing line; I really want it to be a movement. So, one of the things I’ve been focusing more on is doing more community service focused on social work. Doing more philanthropy work. Let’s focus on Fists Up Afros out, but being able to merge that. The whole year of 2015 and 2016 was focused on sharing the message through fashion. Now, I want to move more to sharing the message through actual community service. I have had some community service Fists Up Afros Out community projects here and there, but now that I’m out of school, I have more funding and backing. I can implement these activities and programs way better than I used to be able to back in 2015 when I started. That’s what I’m moving towards now.

MS: Okay, that’s awesome! Are there any specific events you’re hosting? Will there be like a launch or something?

FUAO: As of right now, I’ll say no. People have reached out to me as far as hosting events, but no one has made a deposit yet. So, in my head it’s not official till it’s official. I’m open to them, but right now I don’t have anything booked. I’m still doing photo shoots, but just focusing on branding it in every aspect equally. Give each aspect of Fists Up Afros out the time that it deserves. So, right now, I’m focused on community service.| Off to the Hamptons: Custo Barcelona SS ’17 Collection NYFW Recap 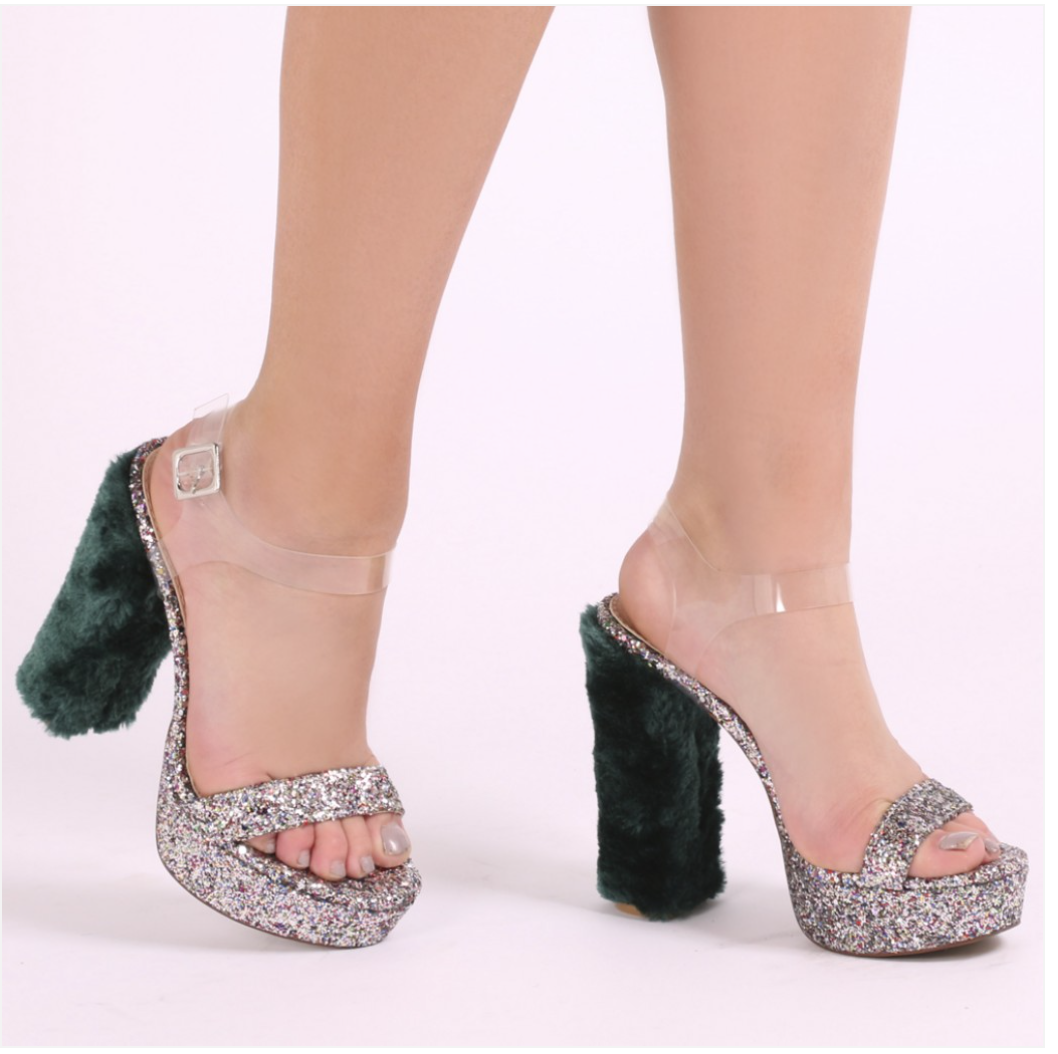